Border Checkposts have always captured imagination of travellers. There is always that urge to see the enemy territory on the other side. It sometimes brings the patriot out in the traveller and in other cases it’s just a scenic spot for travellers to visit.

Wagah border near Amritsar (36 kms) is set on Indo-Pak border, and a renowned tourist attraction for its colorful beating retreat border ceremony held since 1959, where both sides of the border engage in a co-ordinated ceremony every evening, which today has become a symbol of rivalry between India and Pakistan. This is where tourists arrive for the patriotic cry of “Bharat Mata Ki Jai” !!

Kargil lies mid-way on Srinagar – Leh route and renowned for the border conflict in 1999 between India and Pakistan widely known as the “Kargil War”. Kargil is situated strategically on the LoC (Line of control between Indian controlled and Pakistani controlled areas of Kashmir). Kargil War Memorial, a war memorial dedicated to martyrs of the Kargil war, 50 kms before Kargil near Drass is easily the most visible and popular war memorial in whole of India and major tourist attraction for travellers enroute. The war memorial is sure to bring out the patriot in travellers looking at some of the exhibits inside the memorial and the intense presentation of the Kargil war tales by the soldiers.

24 kms from Sangla is Chitkul, home of Indo-Tibetan Checkpost.  Chitkul is blessed with 180 degree views of the Himalayas and the views are one of the major tourists attraction. The checkpost is a 1.5 km walk from where one arrives. The area of windy and weather can be very unpredictable making the 1.5 km walk a bit of an adventure for travellers.  ITBP checkpost is simple and there is no fuss. The soldiers are happy to offer a cup of tea for a few travellers who actually make it upto the checkpost.

Turtuk is a stunning 80 kms drive from Nubra Valley village of Hunder. Turtuk was under Pakistan’s control until 1971, after which India gained control of this strategic area. Turtuk is the last outpost in India after which the Pakistan-controlled Gilgit-Baltistan begins. Turtuk is one of the gateways to the Siachen Glacier and home to ethnically different community that speak Balti and Urdu alongwith Kashmiri. For travellers it’s about the drive, the rustic beauty of the area and intrigue of being in a border area and interacting with villagers that have lived as part of Pakistan as well as India.

Nelong (30 kms from Harsil) is a picturesque Valley near the India-China border near Gangotri area, which was closed for civilians after the 1962 war and has been re-opened for tourists. At 11,600 feet, the valley is a cold desert, home to the snow leopard and the Himalayan blue sheep and offering a view of the Tibetan Plateau. Tourists visiting the valley will see the wooden bridge once used for trade between India and China. Nelong is an excellent diversion for pilgrim travellers arriving at Harsil / Gangotri for visiting Gangotri Temple and Gaumukh Glacier.

Pangong Lake (15000 ft asl – 125 kms from Leh) is set right on the line of actual control between India and China and has been in heart of the 1962 Indo-China war.  Two thirds of the 600+ sq km of lake is under Chinese control. Pangong Lake remains one of the most sought after tourist destinations of Ladakh after it was featured in the climax of Super hit bollywood movie “3 Idiots”.

Tsomoriri Lake (15000 ft asl – 200+ kms from Leh) is set right on the Indo-China border and one passes many checkposts when visiting the area.  Tsomoriri Lake is lesser visited of the high altitude lakes in Ladakh and is renowned for its Nomadic tribes, offbeat character, bird watching and high altitude trekking / biking routes.

Nathu La is a mountain pass in the East Sikkim that connects with Tibet, China’s Autonomous Region. The pass (14,140 ft) is 54 km east of Gangtok, the capital of Sikkim and is one of the three open trading border posts between China and India. Nathu La was re-opened in 2006 after 1962 war and is a major tourist attraction for Indian travellers to Sikkim. The area is windy and renowned for its unpredictable weather. It is also blessed with stunning mountain views and lakeside character (Changu Lake). One is able to go right upto the border checkpost, greet and take selfies with soldiers. 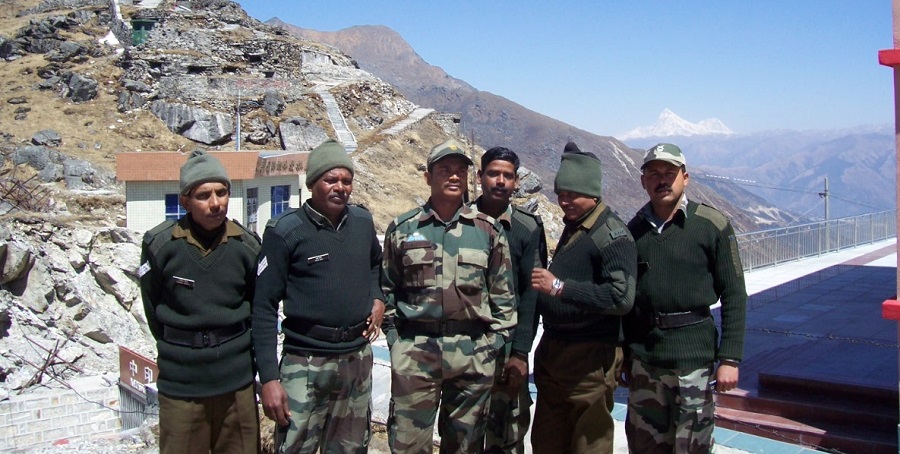 Bum La Pass (15200 ft asl) is an Indo-Tibetan border checkpost at 37 kms from Tawang in Arunachal Pradesh (renowned for its ancient monastery). The area is most rugged, renowned for its exceptional Himalayan views and his holiness Dalai Lama used this route to cross over from Tibet to India. Bum La pass was opened in 2006 after 1962 war and is one of the 4 official BPM Point (Border personnel meeting points) between India and China. Travellers also visit Sangestar Tso, also known as “Madhuri Lake” as it was featured in bollywood movie Koyla that featured bollywood star Madhuri Dixit.

Gulmarg (8000 ft asl – 50 kms from Srinagar) is a renowned Ski Destination and Summer holiday destination for travellers. Gulmarg is home to world’s highest cable car (popularly known as the Gulmarg Gondola). The Phase II of Gulmarg Gondola takes one to the highest ski slopes which are also home to couple of LoC checkposts. Tourists are restricted to go anywhere beyond this point. The Phase II Gondola (14000 ft asl) is renowned for its exceptional Himalayan beauty and has a snow cover 11 months of the year (except September) and therefore most popular for Summer holiday travellers.

I am Niraj Vashi, Founder of a popular travel company Nivalink.com based out of Mumbai. I am here to share my bird watching passion for bird watchers and travellers at large. View all posts by birdersden